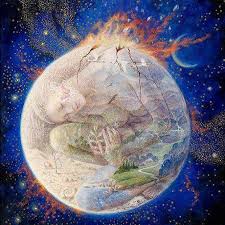 I heard recently that babies in the womb dream. Considering the old Freudian theory that humans have a basic wish to return to the womb, the prenatal dream may very well be a pleasant one. There is warmth, quiet solitude, and everything is soft. All needs are met with no demands of responsibility. Curling up into the fetal position and withdrawing to that virtual, personal utopia is a comfort, at least in thought. Our beds are sort of like that. They’re soft places to fall at the end of the day, they’re dark when the lights are off, and as we drift into slumber, we disengage from the world around us to take our delicious rest.

While we certainly need our sleep to brave the world each day and keep our sanity, there is only a rudimentary aspect of the connection between sleep and happiness. Food, rest and water are basics to maintaining the body and giving us a chance at delighting in our time as human beings. Obviously, though, there’s much more to it than that. However, in the end, I believe it’s essentially simple even if it tends to be elusive.

So, who is genuinely happy? Does this sense of satisfaction welling up from within gravitate toward the well-born, the talented or the lucky and desert the poor and the plain? Obviously not–there are those living in joy and those living in misery among all types of people. However, one would think just maybe there are consistencies of some kind that transcend all walks of life.

The United Nation’s Sustainable Development Solutions Network releases an annual World Happiness Report that ranks the happiest levels of nations around the world. They have been doing this since 2012. They consult certain key factors that contribute to those levels and survey large numbers of people from many countries. The factors used are caring, freedom, generosity, honesty, health, income and good governance. The 2017 edition of the report shows Norway to be the happiest sovereign state. Actually, they and their Scandinavian counterparts dominate the top 10, placing five nations in this select company. Switzerland and the Netherlands, also northern European countries, account for two more. The others are Canada, New Zealand and Australia. The World Happiness Report states in its analysis that “this year’s report emphasizes the importance of the social foundations of happiness. This can be seen by comparing the life experiences between the top and bottom ten countries in this year’s happiness rankings. There is a four-point happiness gap between the two groups of countries, of which three-quarters is explained by the six variables, half due to differences in having someone to count on, generosity, a sense of freedom, and freedom from corruption. The other half of the explained difference is attributed to GDP per capita and healthy life expectancy, both of which, as the report explains, also depend importantly on the social context.

“Work is also a major factor affecting happiness. Unemployment causes a major fall in happiness, and even for those in work the quality of work can cause major variations in happiness.”

Since social issues are of significant importance, one might see in part why the United States has fallen to 19th in the rankings since starting in the number 3 position in 2012. Political polarization, racial unrest and the evermore commonplace mass murder crisis give a few clues as to why we’re falling in the rankings. In contrast, the Nordic countries are consistently near the top, often changing places for the number one spot.

The people in the lowest-ranked nations, many of them in Africa and the Middle East,  suffer from the ravages of poverty and war. Their misery index is easily understood.

What can we take from this? Money isn’t the answer, but for the poorest among us more income can bring us up out of the doldrums at least until our basic needs are met. Additionally, family and friends and broader social support go a long way to making life meaningful and fun, so their contributions to happiness are crucial. Stability and predictability seem to be a common thread through these key ingredients that feed our individual happiness. Still, these guarantee nothing and we can all cite examples of people who maintain an enigmatic discontent in the face of abundant blessing. In the next installment, we take a thorough look at what we can do to truly enjoy our lives…or not.

One thought on “THE COMPONENTS OF HAPPINESS (PART TWO)”